Terrorist attacks have thrust into the news the city that is increasingly known by its official name, Mumbai, but that some expats and residents still stubbornly call Bombay. There's lots more on that horrific news on a dedicated Wiki page and on the BBC web site and in live coverage streamed from CNN-IBN and NDTV. Enough words flying around.

There is another Mumbai story that surfaces from time to time and then goes away–the story of the city's street children. Here from 2005 is an account of a then 15-year old, Rukshana, from a feature in the New Internationalist.

"Rukshana's life is full of movement. She zips through Mumbai's suburbs working wherever she can. At 15, she is her 11-year-old sister Deepa's sole carer. When she first agreed to talk with us, Deepa had gone missing, leaving Rukshana frantic: something that her story only hints at. For as you will read, Rukshana has had to deal with greater challenges."

An estimated 250,000 children live on the streets of Mumbai. Here is Julian Crandall Hollick's 2002 multi-part series broadcast on NPR, Sadak Chaap. And here is a web site created and maintained by former street children. Several street children lost their lives in the 2006 blasts in Mumbai. This 2008 attack was aimed at the rich and powerful, and it's questionable whether anyone will even ask how many children may have died in it.

Finally, here is Voice, a non-profit group working for the welfare of street children. The mission of Voice is "helping children write their future."

Posted by Uma Krishnaswami at 9:38 AM 5 comments: 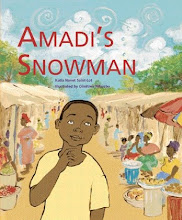 Katia Novet Saint-Lot is putting a new spin on the book tour, using her blog, Scribbly Katia to make an incredible array of connections, all revolving around her picture book, Amadi's Snowman. Katia writes, "One of the central themes of this book tour was to create avenues for children from different parts of the world to think and talk about reading, and books." The blog tour even attracted attention from Publishers Weekly.

And today, Katia's virtual book tour drops in here for an interview with–no, not Katia, but Amadi himself.

[U] Hi Amadi. Congratulations on your book and on the book your story's in. I see you and Mama Katia have been talking to a lot of people. I hope you don't mind one more set of questions. Can you tell readers a little bit about the very first draft in which you appeared? How long ago was that? And what did it look like? Anything else you want to tell readers about it?
[A] Hello Auntie Uma, and thank you for taking part in the blog tour and for being such a good teacher and friend to Mama Katia. She thinks the world of you, you know. Now, the very first draft. It was about six years ago, so I was just a child. I’m a real man, now. In the first draft, I found the book with the snowman and the boy all bundled up in clothes in the same place, under the market book stall. It was really cosy and quiet under that book stall, and I sat and picked up the book and stared at the cover, wondering about that boy and that strange animal with a carrot for a nose, and then, the boy in the book spoke to me. He gave me quite a fright. I jumped and I looked around, because I couldn’t believe it. His name was Thomas. We had a whole dialogue and we even challenged each other, too: I didn’t know about snow, but Thomas didn’t know about the harmattan, which made us equal, in a way. Also, in the very, very first draft, Ifeanyi (that was my first name, as you know) didn’t get the book from Mrs. Chikodili. Mama Katia had already had that idea, but she didn’t dare use it. This was her very first completed story, and she says that she still had much to learn about stories, and about letting them and the characters take the author where they want/need to go. She’s looking over my shoulder right now, and just said to add that she’s still learning.

[U] How did that draft change? How many revisions did Mama Katia do? How did you change through those revisions?
[A] Mama Katia received a letter from an editor who really liked the story, but said to take out the fantasy element and ground the story in reality. So, Thomas was removed, and Chima entered. There were about 9 big revisions, but I checked the computer and there are numbers up to 25 in the Ifeanyi file. As for the way I changed, it’s interesting, because I can see, now, that the changes were like a mirror to my thoughts. Most of the story was very much in place early on, but it had to express all my feelings, and the progression (from the beginning when I will not hear about learning how to read, until I finally accept and understand that I’ve changed my mind) in little scenes that made sense and allowed the story to flow like a river. It had to feel true and leave the reader feeling happy, too.

[U] Is your fiction-world mama happy with your book?
[A] Well, my mom is a mom. She was really happy and proud that my story was going to be made into a book. She did have some issues about the way she looks in the pictures, and some other things. She’s a woman, you know? Always fussing about their looks, and little details that nobody else notices. But overall, yes, she’s happy, especially when she sees how well the book is received. She’s a true literacy advocate, my mother - even though she doesn’t even know these words.

[U] What's happened in your life since the end of Amadi's Snowman?
[A] I’ve learned how to read, and look at me, now, I can type on the computer and answer your questions. I help young boys in my village to learn how to read, and I scold them if I see them hanging out at the market instead of being at school. I am also teaching my mother how to read. At first, she said she was too old, but I kept insisting until she said yes, and now she is really catching up. She is strong and really smart, my mother.

[U] If you could tell writers one thing about putting a picture book kid character together, what would that be?
[A] Try and make your author self as little as a speck of dirt, get inside the mind of your character, and listen very carefully: what is he or she saying? What is he or she feeling?

[U] Thanks, Amadi. Good luck and happy reading.
[A] Thank YOU, Auntie Uma.

And thanks to Katia for letting me come along on this interesting journey.
Posted by Uma Krishnaswami at 7:32 PM 9 comments:

My extraordinary storyteller friends Robert Kikuchi-Yngojo and Nancy Wang, who together make up the fabulous Eth-Noh-Tec are leading a tour group through Tamilnadu.

Yesterday's fare included a workshop on the traditional devotional storytelling form known as Harikatha and led by Dr. Premeela Gurumurthy who can trade chapplakattai (castanets without a hinge) for marker without missing a beat. Dr. Gurumurthy is head of the Music Department at Madras University. She offers a great depth of knowledge about a range of interrelated story forms and their fascinating historical origins. A brief glimpse into an ocean of story.

Crocodile Tears grew out of a collaborative workshop held in Goa in which Swedish and Indian children's writers and illustrators worked together on creating books that belonged to no one culture but spoke to children everywhere. Sandhya is seen here with co-author Jonathan Lindstrom and illustrator Taufiq Riaz--well, sort of.
Posted by Uma Krishnaswami at 11:05 PM 1 comment:

I didn't make that up. "Mubarack Obama!" was a front page photo caption in the Times of India the day the US election results hit the headlines. I love bilingual puns and this one hits the spot.

There will be young children in the White House again. What will that mean for writers of children's books? Surely in an Obama administration, poets will not be banned from readings on account of their political views. Campaign rhetoric aside, what will really happen to those wars already committed to being waged? Still it feels astonishing that there will be, at long last, someone literate in the Oval Office, someone who can write, and who understands that nuance is not a dirty word.

Speaking of nuance, on the plane to India I read The End of Empires: African Americans and India by Gerald Horne. Horne explores the untold history of the relationship between African Americans and Indians in the period leading up to Indian independence in 1947. I've never read this story told in quite this way before. Sure we all know that King derived his views from Gandhi but this book goes deeper. I had no idea of the extent of those connections from W.E.B. Dubois and Lala Lajpat Rai to the Ahmadiyya movement, to John and later Alice Coltrane and the Vedanta Society. I'll be poring over the footnotes and the bibliography in this book for a long time to come.

Looking back, it seemed a fitting prelude to the election results.
Posted by Uma Krishnaswami at 9:21 AM 3 comments:

Uma Krishnaswami
A former child writer who now writes for children and teaches writing in the MFA/Writing for Children and YA program, Vermont College of Fine Arts. Represented by Ginger Knowlton of Curtis Brown, Ltd.

Blogs Related to Children's and YA books